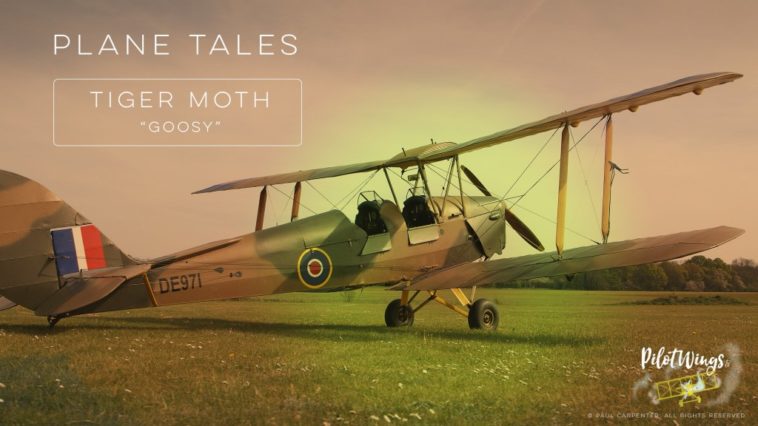 Episode 1 has just been released on the PilotWingsTV YouTube and Vimeo channels, and features the iconic Tiger Moth.  G-OOSY, affectionately referred to as “GOOSY”, is a beautifully restored vintage aircraft currently operated by Aerobatic Tactics at Damyns Hall aerodrome in Essex and Headcorn aerodrome, Kent, UK.

This 1943 biplane was initially French registered during the final years of WWII when it served as an RAF primary trainer. Now benefiting from the care and attention of a team of experts at Aerobatic Tactics, it provides memorable flight experiences for customers around London, Essex and Kent.

A key feature of the unique “Plane Tales” series is use of high quality specially-selected soundtracks which effectively represent the spirit and character of the aircraft.  Authentic aircraft sounds are also captured and mixed into the film’s soundtrack.

The atmospheric music chosen for this particular film was composed by Richard Charles and performed by the internationally renowned BackBeat Percussion Quartet who have performed at iconic venues including the Royal Albert Hall.

The music ebbs and flows throughout this 9-minute film, at first stealing the attention as it reflects the mystique of this delicate vintage machine inside the maintenance hangar. Later, the percussive elements shift gear as the engine splutters to life and the aircraft takes to the skies generating syncopated rhythms of its own.

“Cross Talk” is available for purchase on the album “Switchback”.

Plane Tales sets out to capture the feel of its featured aircraft but also offers interesting information and insight.  In this episode we learn more about the Tiger Moth from Aerobatic Tactics chief pilot, Tony Richards who generously provided his time and resources to aid the making of this film.

The continued development of PilotWingsTV would of course not be possible without the help of its supporters and collaborators, not least the owners and operators of the aircraft.