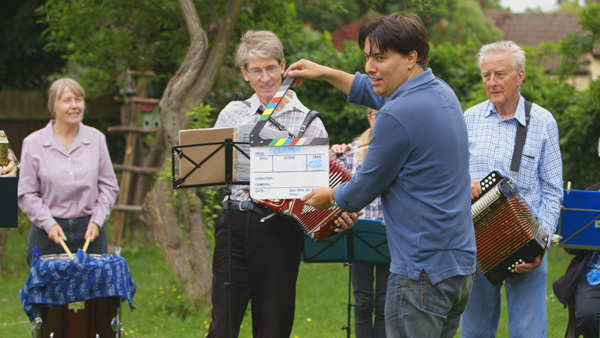 Back in 2013 I produced my original TV-broadcast documentary on behalf of the Yardarm Folk Orchestra in Southend-on-Sea.  This successful and popular community organisation attracts members from all walks of life and all musical abilities, performing its unique blend of folk music at local and charity events.

In a challenging but fun shoot over several days, sharing time with the group again reminded me of their admirable values and priorities, which have helped them attract so many happy members.  Their  teamwork, inclusion, effort, commitment and community spirit is inspiring to see within a group of volunteers.  Musically, the orchestra are very impressive too.  The new film features just a selection of members from the main orchestra, as well as three specialist groups.

Following production of the new video, the Yardarm Folk Orchestra subsequently employed me to produce a series of printed media including retail DVDs, promotional leaflets and pop-up roller banners.  My designs for them were made from scratch, carrying across the nautical theme used throughout the new video.

I designed a custom YFO logo and broad range of nautical map textures from hand-painted art, to use as a base for the print designs.  All of the images used were high resolution still frames from my video coverage on this project and the previous one.  The end result was a matching set of heavyweight promotional items for the YFO to use at public performances and exhibitions.

If you are interested in joining the Yardarm Folk Orchestra, rest assured new members are welcome.  In the words of Music Director, Malcolm Reid, “If you play an instrument and are prepared to improve, you’ll fit in, making new friends and playing music with a group for fun and satisfaction”.

Customers can also benefit from my extended services, including graphic design for websites or print – including leaflets, banners and merchandise.

“Paul Carpenter Films – the costs are tailor made depending on what you would like. He does everything from one-minute clips to full length features and he will discuss all this with the customer. Whatever the cost, you do get value for money. His first question is along the lines “What do you want to achieve?” and you go from there. He is so honest that if he thinks it wont work then he’ll tell you – he refuses to do any botched jobs, it’s either “brilliant” or it doesn’t happen.

The first dvd three years ago was so good that the BBC picked it up and broadcast it three times on their Community Channels. Not cheap for us, but every penny was well spent and our orchestra really took off after that first film.
This is NOT a one man band, fly by night company – Paul is unbelievably thorough and professional with a lot of creative ideas and patience. I would say that if you want a top notch film then you don’t cut corners, you use someone like Paul. If the cost is prohibitive then it’s probably better to not make a film at all or to at least modify what you want. Paul is as straight as an arrow and will advise you without any hard-sell tactics.
I can’t speak highly enough of Paul and his work.”
Malcolm Reid, Music Director, Yardarm Folk Orchestra